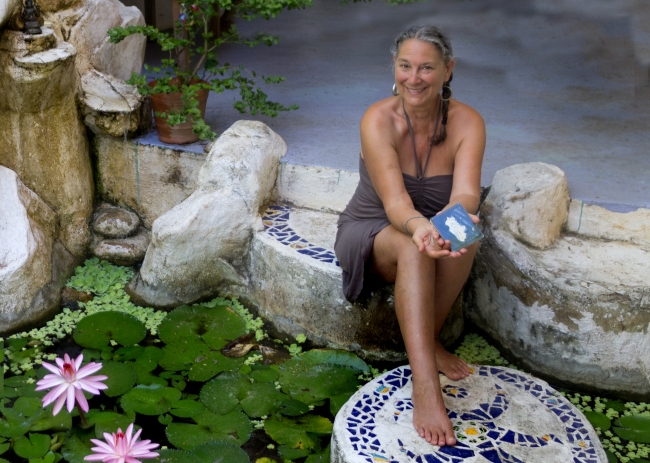 Lilly: Hi Linda, welcome back from Mexico. How was the women’s retreat?

Linda: Fantastic.  It was the best retreat yet.  There were 9 of us, a full house. A mother and daughter, who have come three times, already signed up for next year. They consider it a yearly “tune-up” for their relationship! For me, it’s an opportunity to feel very free, in nature, like I was as a young woman. And the nature there makes me euphoric. It is 2nd in biodiversity to the Amazon. Check out this house, Lilly, it belongs to Claudia Brown. She’s a massage therapist, a tropical garden gardener, has a bird sanctuary, and makes the most beautiful jewelry – lives in Yelapa full time. This lily pond is inside the house!

Lilly: Wow! Remind me where the retreat takes place?

Linda: In Yelapa, Mexico, a fishing village. Kellie Shannon Elliott (who will come next year again) led 5Rhythms dance each morning; we met in circle for a few hours before a late lunch, and later Norma Jean Young, a great Reiki Master, led us in relaxation in the late afternoons.  The thing I love the most about Yelapa is feeling of sun, the air on my skin, the sound of the waves 24/7, and that we get to swim in some of the most pristine water on the planet – One day, we hiked to this waterfall in another village to swim in a glorious poor. We just strip down and jump in. Here, see these photos. After the waterfall, we go by boat to another little fishing village and have a home cooked lunch with a Mexican family, replete with moonshine and guitars.

Lilly: That sound amazing! Well, that’s not the only event that the beginning of summer has in store for TTC, is it?

Linda: That’s right. Not only are we doing our facilitator training, which is happening in a couple weeks, and BTW, there are still a few places left (check our website: www.teentalkingcircles.org), but also some other partner organizations have some great offerings this summer. Check this out:

We have Isabel Machuca-Kelly from Wild Whatcom, along with Vanessa Osage of Rooted Emerging, offering girls’ talking circles in Bellingham, Washington. People can find out more about the details by checking this site: wildwhatcom.org/about-teen-talking-circles/ Also, Rite of Passage Journeys, in Washington, is doing some really powerful summer camps where they do circle. And Wilderness Awareness School has some amazing programs this summer. http://www.wildernessawareness.org

Lilly: I heard you’re invited to be an “elder” this summer at the Generation Waking Up Leadership Training, which is happening in a couple weeks on Whidbey Island, at the Whidbey Institute.

Linda: Yes, it’s true –  I don’t know many youth on the face of the planet who are more incredible than Barbara Jefferson, Dan Mahle, and Joshua Gorman, who are leading this Wake-Up. Check it out; there are scholarships and more spaces…http://www.whidbeyinstitute.org/conversation/id/53080a

By the way, we have an exciting event in the planning stages in September: We’ve been invited by the PBS station in Japan to create a special circle, which will be filmed for a segment of a series on cell biology. This one will be about youth development. I’m intrigued to see what they’re going to be doing. More about that later. We’re going to need some volunteers – so the call is out there. Any teens interested???

Lilly: Wow. How does something like that happen? That’s great…

Linda: They found us on the Internet.

Lilly: Hey, what about that Noam Chomsky interview I just transcribed – when does it come out? And the Joanna Newsom interview from so long ago?

Linda: The interview I did in April with Noam will come right after this blog post. The one with Joanna, very soon. Both are powerful and important. I’ve been interviewing Noam since 1999. I just wrote him today asking him to comment on the Edward Snowden’s leak. I just heard that ACLU has put forth a lawsuit against the government now, as well. Here’s what Noam wrote back. “He should be admired for bravely meeting the responsibilities of citizenship: letting the public know what their government is doing to them.  The claim that the massive government surveillance programs are necessary to secure the population from terror barely merits ridicule, coming from a government that has quite consciously been increasing the threat of terror to Americans as the predictable consequence, well-understood in high places, of the global drone assassination program, which is also by far the most extreme international terrorist campaign in the world.” Noam does not mince words.  I say, Activists UNITE… I asked Eric the other night what he thought we can do other than what we are already doing… I said it feels like the machine is so big, we’re like Cervantes’ Don Quixote, tilting at windmills. We agreed, we just gotta keep doing what we’re already doing. Working to help shift from the patriarchal, dominate paradigm to the holistic, partnership paradigm…

Speaking of interviews and just keeping focused on what one person can do, Brenda Starr, star reporter for KHSU, Humboldt State U interviewed me for Through the Eyes of Women. It will be aired Monday, July 8th, at 1:30pm PST and will be streamed on the station website, and on their blog: www.khsuwomen.wordpress.com. I speak not only about TTC, but about my photography, and how both these acts give me a way to express my values.

Other than that, we’re having a beautiful summer here in the Pacific Northwest – the veggie garden is full and we’re eating out of it daily – we’re also eating a lot of Kraut – Iggy’s Sauerkraut, to be exact. My tummy has gone down, which feels so much better. I was pretty bloated for some reason, but the Kraut, and this cleanse I’m doing with Chaparro Amargo, which we got in Mexico, is a summer boon to my system. I’m also intensely glad to have my daughter, Heather, back in town, and her sis, Genevieve is done with her first year of UW Nursing School (halleuluja), and Eric wrote another story while we were in Mexico…so life is good. Plus, I also love that you’re working here in the office with me on Tuesdays and Wednesdays, Lilly…

Linda: Thank you, Lilly. I love having you here!

Linda: Ok, enough work for today – let’s go jump on the trampoline and get outta this office!  The sun’s out… can’t miss it while its here, now can we!  Oh wait, it just started to rain. Dang! No, wait, it’s back… let’s get outta here!